skip to main | skip to sidebar

Barbara Kurtz wrote an email to me on Thursday asking about comparisons between Stuart Shils work and Frank Auerback's. I think it's interesting that Barbara is drawing a correlation between the two painters and am curious to ask her how she relates the two to one another.

I think Shils painting surface, though perhaps similar to Auerbach in that the paint is applied thickly, is quite different.
I understand that Auerbach rarely does any sketches or preparation for his paintings -- particularly when painting figures, which he is known for. He just jumps right into the painting and his surfaces are almost sculptural....the paint is that thick.
I'm really not sure how Shils prepares his paintings....if he does sketches first, etc. however, it appears to me that his paint surface is not as "volatile" as Auerbach's. Shils' surfaces seem more evenly controlled and less sculptural and there is a lighter feeling to his paintings overall. Auerbach's feel heavy to me and since he's painting the figure more than Shils does, this may be appropriate whereas Shils may be going for a more atmospheric feeling given he paints predominately landscapes (or abstractions of landscapes.)

I have attached here an example of each -- 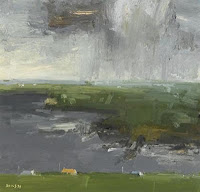 Frank Auerbach
Posted by A What If Girl at 10:33 AM No comments:

Raging Seas in the Snow

After encountering another bout of canceled classes yesterday at G.A.S. due to our second major snowstorm, I found myself feeling frustrated that I couldn't keep the continuity going among our group. I encouraged everyone to carry on at home and a few of you wrote back asking questions and/or expressing some ideas that I felt could also benefit the group.

So, whatever I post here will be items that I hope can be helpful, encouraging, and inspiring to you. I have invited all of you to be authors on this blog which means that you can come into the blog and create your own postings. I'm still trying to figure out the details of how to do this and will post tips just in case any of you would like to try it. You need a gmail account to post on this blog.

Kate Rossi from our Thursday class wrote me yesterday and included her first attempt at painting with palette knives. I am going to try posting her image here so that you can all see -- she did a FABULOUS job on her first try. Can't wait to see the real thing but this gives you all a pretty good idea of what she came up with.

Kate has called this - "Raging Seas." 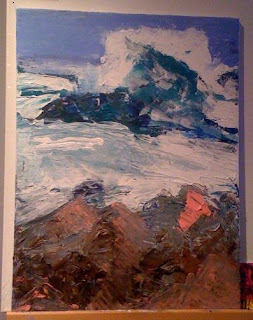